We all store more and more of our lives in digital form; spreadsheets, résumés, wedding speeches, novels, tax information, schedules, and of course digital photographs and video. All of this data is easy to store, transmit, copy, and share, but how easy is it to get back?

All of this data can be a harsh reminder that computers are not without fault. For years, storage costs have been dropping while at the same time the amount of storage in any one computer has been increasing almost exponentially. We are at a point where a single hard drive can contain multiple terabytes of information, and with a single mishap, lose it all forever. Everyone knows someone who has had the misfortune of having a computer stop working and wanting their information back.

It’s always been possible to safeguard your data, but now it’s not only necessary thanks to the explosion of personal data, it’s also more affordable than ever. When you think of the costs of backing up your data, just remember what it would cost you if you were to ever lose it all. This guide will walk you through saving your data in multiple ways, with the end goal being to have a backup system that is simple, effective, and affordable. In this day and age, you really can have it all.

It’s prudent at this point to define what a backup is, because there are a lot of misconceptions out there which can cause much consternation when the unthinkable happens, and people who thought they were protected find out they were not.

Backups are simply duplicates of data which are archived, and which can be restored to a previous point in time. The key is the data must be duplicated, and you have to be able to go back to an earlier time. Anything that doesn’t meet both of those requirements is not a backup.

As an example, many people trust their data to network storage devices with RAID (Redundant Array of Independent Disks). Without going into the intricacies of various forms of RAID, none of these Network Attached Storage (NAS) devices are any sort of a backup on their own. RAID is designed to protect a system from a hard disk failure and nothing more. Depending on the RAID level, it either duplicates disks, or uses a calculation to create a parity of the data which can be used to calculate the original value of the data if any part of the data is missing from a failed disk. While RAID is an excellent mechanism to keep a system operational in the event of a disk failure, it is not a backup because if a file is changed or deleted, it is instantly updated or removed on all disks, and therefore there is no way to roll back that change. RAID is excellent for use as a file share, and can even be effectively utilized as the target for backups, but it still requires a file backup system if important data is kept on the array. 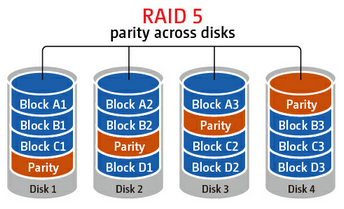 Another similar example is cloud storage. Properly configured, cloud storage can be a backup target, and different services can even properly perform backups, but the average person with the average Google Drive or OneDrive account can’t copy their files there and hope they are protected. As with RAID, it is a more robust file storage than any single hard drive, but if you delete a file, or copy over another, it can be difficult or impossible to go back to a previous version.

Both RAID and cloud storage suffer from the same problem – you can’t go back to an earlier time, and therefore are not a true backup. True backups will allow you to recover from practically any scenario – fire, flood, theft, equipment failure, or the inevitable user error. This guide will walk you through several methods of performing backups starting at simple and moving up to elaborate systems that will truly protect your data. These methods work for home and business alike, just the type of equipment will likely differ.

There is some common terminology used in backups that should be defined before we start discussing the intricacies of backups: