Since the ASUS has a pair of HDMI inputs, but there is effectively no 4K HDMI content right now, the performance of the internal scaler is essential to know. To test it, I use an Oppo BDP-105 Blu-ray player and the Spears and Munsil HD Benchmark, Version 2. The Oppo has its own 4K scaler so I can easily compare the two and see how the ASUS performs.

First off, the ASUS is poor when it comes to video processing. Common film and video cadences of 3:2 and 2:2 are not properly picked up upon and deinterlaced correctly. The wedge patterns are full of artifacts and never lock on. With the scrolling text of video over film, the ASUS passed which was strange as it fails the wedges. It also does a poor job with diagonals, showing very little if any filtering on them, and producing lots of jaggies.

Spears and Munsil also has a 1080p scaling pattern to test 4K and higher resolution devices. Using the ASUS scaler compared to the Oppo it had a bit more ringing but they were pretty comparable. This becomes very important for watching films or playing video games, as you’ll need to send a 1080p signal to get a 60p frame rate. 24p films will be fine, but concerts, some TV shows and some documentaries are 60i and would then appear choppy if sent at 4K over HDMI.

In our preview of the PQ321Q, we looked at how it performed out of the box with the default settings. What we did see is that the PQ321Q can get really, really bright. Cranked up to the maximum I see 408 cd/m2 of light from it. That is plenty no matter how bright of an office environment you might work in. At the very bottom of the brightness setting you still get 57 cd/m2. That is low enough that if you are using it for print work or something else in a darkened room the brightness won’t overwhelm you. 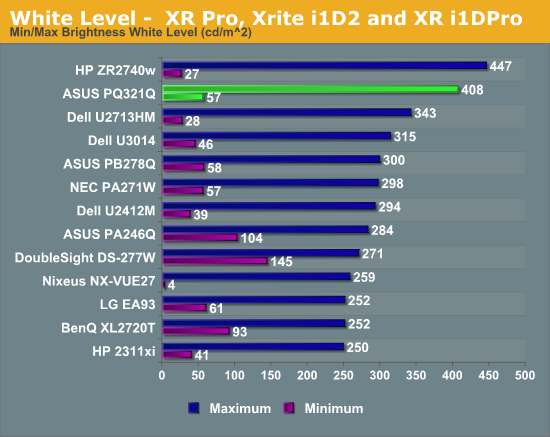 The change to IGZO caused me to wonder how the black levels would behave on the ASUS. If energy flows far more freely, would that cause a slight bit of leakage to lead to a higher black level? Or would the overall current be scaled down so that the contrast ratio remains constant.

I’m not certain what the reason is, but the black level of the PQ321Q is a bit higher than I’d like to see. It is 0.756 cd/m2 at the lowest level and 0.5326 cd/m2 at the highest level. Even with the massive light output of the ASUS that is a bit high. 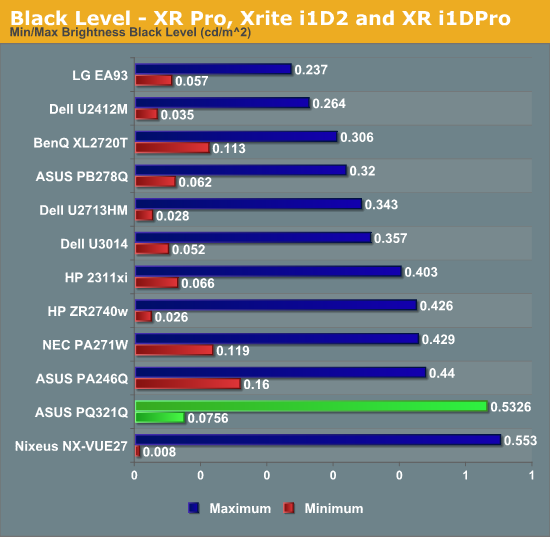 Because of this higher black level, we see Contrast Ratios of 755:1 and 766:1 on the ASUS PQ321Q. These are decent, middle-of-the-pack numbers. I really like to see 1,000:1 or higher, especially when we are being asked to spend $3,500 on a display. Without another IGZO display or 4K display to compare the ASUS to, I can’t be certain if one of those is the cause, or if it is the backlighting system, or something else entirely. I just think we could see improvements in the black level and contrast ratio here. 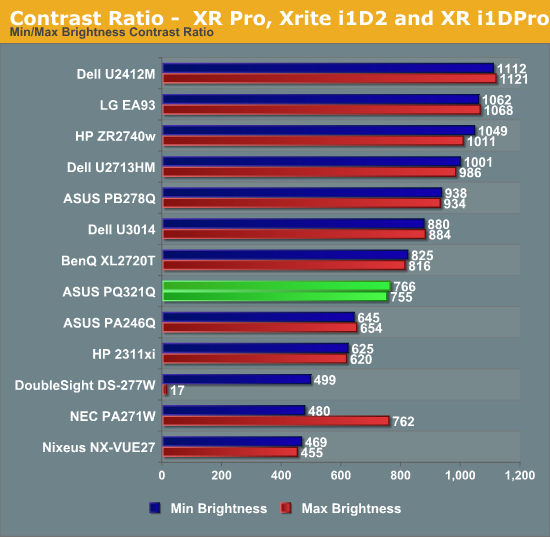