Let’s spend a minute talking about status symbols. In every culture, certain things become elevated as carrying value and importance above and beyond themselves. In more heroic times, a scar denoted meritorious service in battle. Being fat in the dark ages was as good a symbol of wealth as Gucci handbags are today. Fashionable accessories are status symbols today, which is as clear a sign as any that ours is a materialistic and wealth obsessed culture. Harsh, maybe, but not all status symbols are as vain.
Gadgets have long been status symbols, as far back as the Motorola brick phones, and further back to color televisions and FM radios. Technology itself is insufficient to be a status symbol, though, because while a $1200 purse will remain unattainable for the masses, every technological bauble will eventually be mass produced and sold at Walmart. For a gadget to be a status symbol it needs more than just hardware and software, though missing on either of those can be crippling. Status symbols are sexy. They’re unique, though that quality is often short-lived. And, they’re expensive. The Motorola StarTac was a status symbol. The HP LaserJet 1200 was a status symbol. Sony’s earliest HDTVs were status symbols. And then, of course, there’s Apple. Apple breeds status symbols. Every category they’re involved in is trendsetting in style, provides a laudable user experience, and commands a premium over their competitors.
Google, is almost utterly absent from the lengthy list of status symbols. To some degree, that has been part of the company’s ethos. Their goal has been to provide users with the best user experience possible, and at the best price possible, which is as often as not: free. Making something free can really boost early uptake, but it doesn’t make for a good status symbol. Even Google’s Nexus line has really only built status symbols for the gadget inclined, I doubt my wife could spot a Galaxy Nexus from across a room, let alone the Nexus 4. Google is a services company. They develop search tools, mail clients and cloud-based solutions. They help you keep your schedule, catalog your work and life, find a decent Chinese take-out near by, and play some Angry Birds while you wait for your order to be ready. They’re useful, essential even, but boring, and unlikely to sell something that you crave in an entirely illogical and excessive manner. Right? 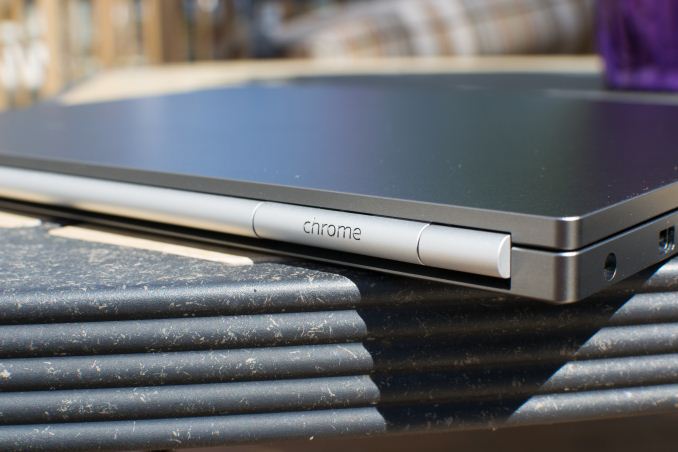 It ships in a typically minimalistic box. I don’t mean typical for Google, I mean typical for an industry that has learned that gaudy packaging is more likely to hinder than help sales. Though it looks like you’d push one recessed end of the package out to slide the box from its sleeve, entry is actually made by lifting a flap held in place by magnets. I’m a cheap date when it comes to packaging. Magnets will always win me over. Once revealed, the grey slab is irresistible. It wins you over before it does anything but sit there. The exposed hinges are masked by a silver barrel that runs the width of the device. The aluminum is cold to the touch, and the only flourish is the LED strip lower down the lid, dormant, but nonetheless exciting for its potential. It’s lighter than you expect when you lift it, and feels solid; not simply in the sense of its rigidity, it feels like a block of aluminum weighing just north of 3 pounds. Right angles abound but are softened with chamfered edges making it comfortable to hold and touch. Its meager thickness is uniform across its length, and the weight is similarly balanced, avoiding the rearward bias of other notebooks. Almost without thought I find myself torquing and flexing against the device; my hands struggling to elicit a single creak or bend from the frame. Setting it down and lifting the lid, it boots in a breath, and reveals an image so rich with detail I’m drawn closer to get a better look. Chromebook or not, the Pixel is a status symbol. And I want it.
Context and Design Why Not Android?
Tweet
PRINT THIS ARTICLE
Comments Locked