Nanoxia Deep Silence 1 Case Review: You Asked For It, You Got It

When I reviewed the BitFenix Ghost, some of you requested we take a look at the Nanoxia Deep Silence 1. Nanoxia isn't selling on American shores yet, but there's been a lot of buzz going around about this case, and Nanoxia has been steadily making inroads towards getting it into our hands. If you couldn't tell from the name, the Deep Silence 1 is designed for quiet, efficient running, and in many ways it looks like exactly the case I requested at the end of my review of the Ghost: same principles, just bigger and better. 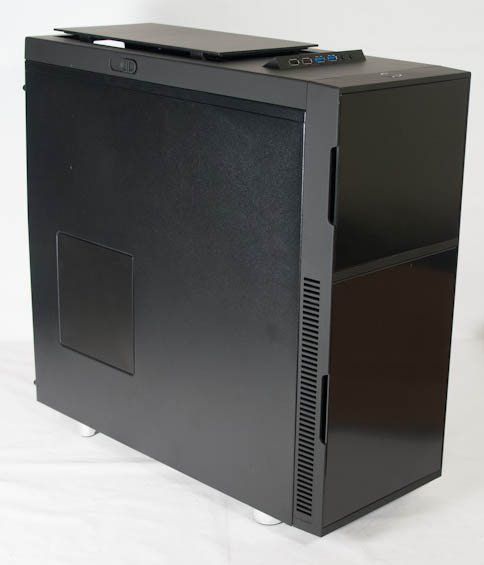 In my experience, cases engineered for silent running can oftentimes be chasing the wrong vectors. They're seldom bad cases, but acoustic padding can't make up for efficient airflow, and having to close off ventilation can actually cause more problems than it solves. It's entirely possible to produce a silent, well-ventilated case, but getting the design right means dodging a veritable minefield of decisions that will threaten to undermine your intended goal.

The result, thus far, has been that while cases like the BitFenix Ghost and Corsair Obsidian 550D aren't necessarily bad, with our testbed they've had to expend more effort on trying to smother the noise generated by high fan speeds rather than keeping the components cooler in the first place. Users interested in building a system designed to run quietly will have less trouble (they'll be more apt to use quieter-running parts), but the underlying issue persists, so the question is...was Nanoxia able to do the unthinkable and balance the equation?

Even just unboxing it, what struck me the most about the Deep Silence 1 is how heavy it is, and that was my first clue that it might be a bit better at its job than some of the other silent cases I've tested. It's appreciably heavier than both the BitFenix Ghost and the Corsair Obsidian 550D due to the use of both the acoustic padding and, frankly, a heavy steel frame. This is not a cheaply built case, and the thicker materials used in its construction should go a long way towards containing noise.