While AMD’s official Radeon HD 7990 (New Zealand) continues to be missing in action, we’ve known for some time now that PowerColor has been working on their own custom dual-GPU Tahiti card. This week that card has finally received an official announcement and a name: the PowerColor Devil13 HD7990.

At its most fundamental level, the Devil13 HD7990 is a single-card 7970CF solution, following in the grand tradition of exotic dual-GPU cards. These cards represent a step beyond AMD and NVIDIA’s official dual-GPU cards, which shy away from single-GPU flagship performance due to power, size, and noise reasons. With exotic cards PowerColor and other partners can disregard those concerns completely, instead focusing solely on performance and bragging rights.

To that end, PowerColor has built a true behemoth in all respects. On the performance side of things the card is indeed a pair of 7970s on a single card, with two Tahiti GPUs mounted on a single PCB and clocked identically to the 7970 (925MHz), each with 3GB of GDDR clocked at 5.5GHz. As is typical for these exotic cards, the Devil13 also offers a further factory overclocked configuration that when activated pushes the GPUs to 1GHz each, some 75Mhz (8%) over the 7970. This in turn would push the performance of the card closer to that of the 7970GE in CrossFire, which has a similar 1GHz base clock. 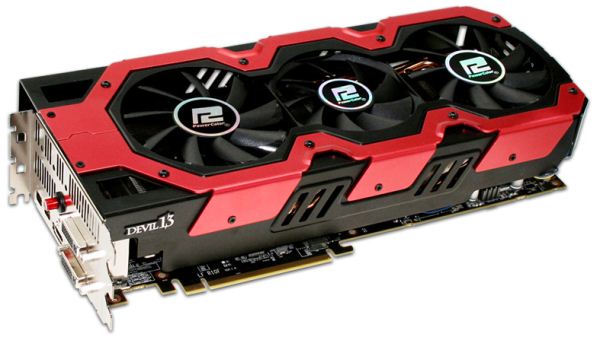 Of course that much performance requires quite a bit of power. PowerColor doesn’t specify a TDP, but the card is equipped with 3 8pin PCIe power sockets, which would allow it to stay within spec while pulling up to a massive 525W. That kind of heat dissipation requires an equally overpowered cooler, which PowerColor provides in the form of a very large triple-slot triple-fan cooler, hooked up to a hereto unknown heatpipe/heatsink assembly. We’ve seen similarly large coolers pull off some amazing feats before so there’s little question it’s up to the task, making it more a matter of just how quietly such a cooler can operate under the circumstances.

But like all exotic cards, that kind of performance won’t come for cheap. PowerColor has not announced a price on the Devil13 HD7990, however in previous years we’ve seen similar cards go for $1200 or more. It goes without saying that once the Devil13 HD7990 does start shipping, it’s unquestionably going to be ultra-expensive and ultra-rare.