It has finally happened; Google has officially released Chrome for Android. In typical Google fashion, the browser is currently in beta and requires Android 4.0 Ice Cream Sandwich to run.

Chrome for Android has been designed from the ground-up for mobile devices with focus on speed and simplicity and a lot of the features from the desktop version have made their way into the Android version.

Some of the main features include a minimalist UI optimized for smaller screens and support for intuitive gestures such as flip and swipe to manage an unlimited numbers of tabs. Google compares this to holding a pack of cards in your hands, but I doubt it would be the same for a 10” tablet.

Of course, Chrome for Android also inherits the same speed and performance from its desktop sibling with super-smooth scrolling, background loading of top search results and some other under-the-hood tweaks for a speedy browsing experience on your mobile device.

To get an idea of how Chrome for Android compares relative to other Android browsers, we've run some quick SunSpider tests on a Motorola Xoom running Android 4.0.3: 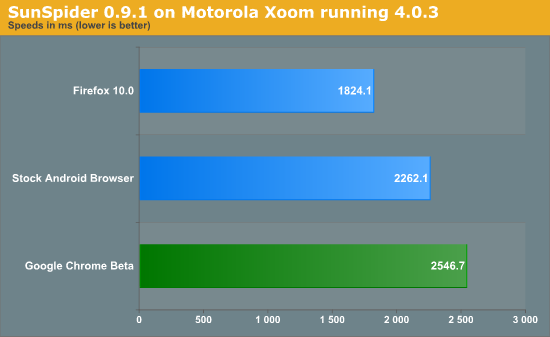 As with the desktop versions, Chrome trails Firefox in raw SunSpider speed, though of course it should be noted that Chrome is a freshly-released beta and Firefox for Android has had a few product cycles to mature. Chrome is also slightly slower than the stock Android browser, but the same footnote applies - Chrome for Android is still a work in progress.

Chrome for Android also features the Incognito mode and as Google calls it, some “fine-grained” privacy options. Some other nifty features include Link Preview, which makes selecting the right link easier on a cluttered page.

The sync feature is an attempt by Google to unify your browsing sessions at home and on your mobile devices. There an option to view the open tabs on your desktop and even get autocomplete suggestions for the most visited websites on your computer, displayed right on your phone or tablet. Bookmark syncing is obviously a given. While these features are extremely handy, I see potential for abuse in every single one of them, especially if you lose your phone.

Android for Chrome is now available on the Android Market, and as usual, Google would greatly appreciate your feedback. We will follow up with a more in-depth benchmark run soon.

Some further testing on one of our Galaxy Nexii running 4.0.4 reveals that in some cases the version of V8 bundled in Chrome for Android winds up being slightly faster than that of the stock browser application. This is quite possibly due to the different instruction sets supported between Tegra 2 on the Xoom as shown above and OMAP4460 in the Galaxy Nexus, the largest difference being inclusion of NEON. 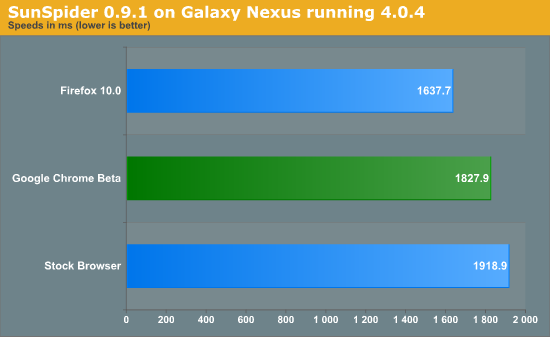 Interestingly enough, Chrome for Android also includes an about pane that includes the JavaScript V8 version - 3.6.6.18, and WebKit version - 535.7, which is the same version of WebKit as the stable branch of desktop chrome runs. In addition, this marks the first time that I've seen Android running a newer version of WebKit than iOS, which as of 5.0.1 is still 534.46.

When it comes to HTML5test, the newer version of WebKit in Chrome for Android also handily outscores both the stock Android browser and the latest version of MobileSafari on iOS. This is a definite step forward for true parity between the desktop and mobile browsers.

In spite of not being compatible with Flash (which isn't a surprise given Adobe's previous statements) far it's looking like Chrome for Android is almost everything that Android users were hoping for. In addition, uncoupling the core OS version from the browser is a huge step in the right direction for ensuring that users are using the latest and most secure browsers online instead of being saddled with the incredibly slow carrier-approval update cadence.