As expected, Apple today unveiled a range of speed and functionality improvements for its MacBook Pro lineup. The update was unusually quiet for Apple. There was no scheduled press event and nothing more than a press release announcing the specs and availability. Apple retail stores received stock prior to today and began selling product immediately. The Apple online store also has immediate availability. 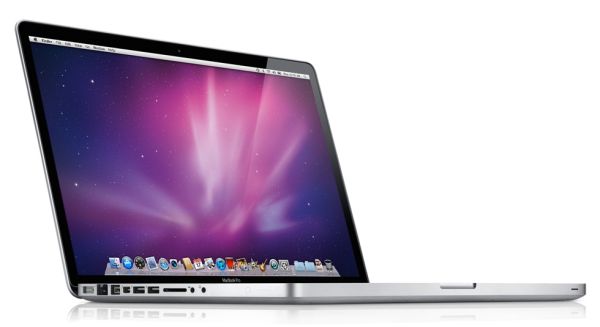 Contrary to earlier reports, there are no default SSD configurations although the solid state offerings are still optional. The big new feature (outside of Sandy Bridge) is support for the first incarnation of Intel’s Light Peak interface technology, now called Thunderbolt.

When Apple moved its MacBook Pro lineup to Arrandale, the poor 13-inch model lost out - it remained with an older Core 2 Duo CPU. The move to Sandy Bridge is different - all models got an upgrade.

Sandy Bridge is used across the board and interestingly enough only the 13-inch model uses a dual-core CPU. Both the 15-inch and 17-inch MacBook Pros now feature quad-core CPUs. This makes these two MacBook Pros ripe for a desktop replacement usage model, particularly if paired with an SSD.

Sandy Bridge obviously integrates Intel’s HD 3000 graphics on die, which is used by all of the new MBPs by default. The 15-inch model and 17-inch model add switchable dedicated graphics from AMD, ousting the NVIDIA chips that powered the previous lineup. I wouldn’t read too much into this – Apple is always going back and forth between NVIDIA and AMD graphics, usually based on whoever happens to be offering the best or most efficient chip at the time of refresh.

Per usual, this refresh sees Apple offering customers more computer for the same money, rather than giving out any substantial price cuts. This is nothing specific to Apple but rather a benefit of buying in an industry driven by Moore's Law.

One number on this spec sheet sticks out like a sore thumb from the rest, and that is Apple's decision to offer 5400RPM SATA hard drives as the default storage option across the line. The price differential between 5400 RPM drives and 7200 RPM drives is negligible these days, and for these prices, the company could certainly afford to address this performance bottleneck. I would hope that Apple would at least consider Seagate’s hybrid drive as an alternative until we get Intel enabled SSD caching.

Apple has finally standardized on 4GB of memory across the board, although I would’ve liked to have seen 8GB offered on the higher end configurations.

Also new is what Apple calls a "FaceTime HD camera," which looks to be a high definition version of Apple's standard webcam - not much more that's noteworthy about this, except that the iSight moniker is continuing its slow disappearance from Apple's spec sheet one model at a time.

It is disappointing that Apple makes no mention of QuickSync in its announcement. The hardware video transcoding engine is a key part of Sandy Bridge, however it looks like OS X support for the technology may not be ready quite yet.

It’s worth noting that Apple’s new laptops were apparently not delayed much by the SATA bug discovered in the 6-series chipsets last month – this likely means that Apple is shipping the affected B2 stepping parts but only using the 6Gbps ports.

There’s no change in chassis size or weight with the new MacBook Pros, this is an internal upgrade. Well, mostly...