Something you don’t immediately glean from the spec sheet is the build quality of the 5102. It’s not going to reach ThinkPad levels, but its far more solid feeling than any other netbook I’ve used. Initial impressions are that HP took their ProBook 5310m and used a shrink ray to create the Mini 5102 (and they also drastically shrank performance, naturally).

There’s an aluminum backing on the LCD cover, and soft-touch plastic on the palm rest. Build quality feels great, with a nice, rigid chassis that shows no flex. That comes courtesy of a magnesium alloy frame, complete with spill-resistant keyboard with a Mylar film underneath to protect from minor spills. HP also includes their 3D DriveGuard to protect the hard drive from damage caused by movement. The “3D” comes from the presence of multiple accelerometers to detect movement in all three axes.

Along with the positive aspects of the build quality, there are a few areas where we’d prefer something else. There’s glossy plastic spacing between the keyboard keys, and a glossy coating on the touchpad and bezel. The palm rest is also prone to showing oily marks from your hands, even after just a few minutes of use (in my experience). So, you really do get a very similar look to the ProBook, including the good and bad aspects. 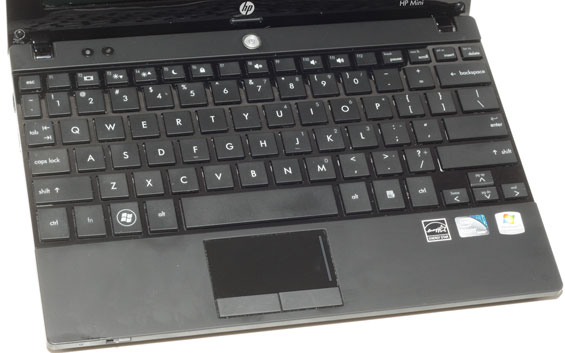 The keyboard is one of the best parts of the 5102. Unlike so many other netbooks, this is a usable 10.1” keyboard. There’s a decent amount of space between the keys, and the keyboard uses all of the available area, going from the left to right edges of the chassis. Key travel is also good, and there’s absolutely no flex at all in the chassis. HP also touts the Durakey coating that helps keep the keys from becoming shiny (and keeps the letters from fading) over time. While fatigue from long bouts of typing can be a problem for me, and it’s particularly an issue with smaller keyboards, at least the Mini 5102 doesn’t leave me wanting to hurl the system against a wall after a few minutes. 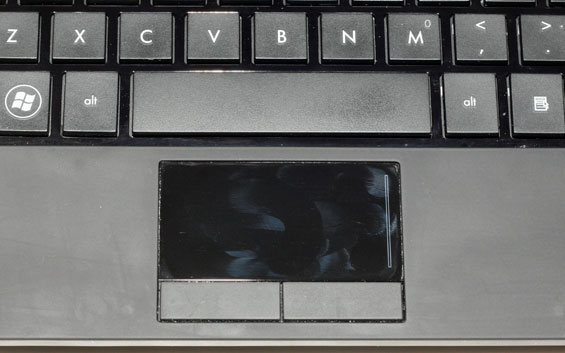 Based purely on the feel of the system and keyboard, this is my favorite Atom netbook to date, but there are areas where it falls short. For one, the LCD is standard “junk”. ASUS had an awesome matte LCD in the 1001P (and the same goes for the glossy LCD in the 1005HA). The LG panel in the 5102 is bright but low contrast, similar to the panel in the 5310m (and worse than the panel in the Samsung N210). Going along with the LCD, I wish the touchpad and keyboard backing weren’t glossy; the touchpad in particular looked horribly greasy/smudged after just a few minutes of use. The touchpad is also of the non-multi-touch variety, which is another indication of the age of this particular design.

Battery life is slightly sub-par for a Pine Trail netbook, and the base 4-cell 29Wh battery is positively puny. HP claims up to 4.5 hours of battery life on the 4-cell battery, but in our best-case idle battery life test we just barely made it past four hours. If you’re using it “as intended” for shorter meetings and lunch trips, the 4-cell battery is fine, but if you want more there’s a 6-cell upgrade available. With the 6-cell 66Wh battery you can get around eight hours of moderate (i.e. Internet) use, and just shy of 10 hours light (idle) use, but ASUS managed nearly 11 hours with a smaller 58Wh battery in the 1001P. The 7200RPM hard drive might be partly to blame, and realistically most business users will be fine with eight hours, but it’s still odd that the 5102 can’t do better.

If you pick up the standard model for $400, the Mini 5102 is a nice netbook, but the paltry 29Wh battery is a real sore spot. Spending an extra $100 for better build quality and features is at least viable, but we would like all other areas to remain equal—and “equal” in this case means keeping up with the ASUS Eee PC and similar netbooks in battery capacity. If you don’t care too much about battery life and you’re looking for a classy sort of netbook as opposed to the cheap plastic options that are so readily available, the Mini 5102 is a good choice. Once you factor in the larger battery and a few other upgrades, though, it becomes clear that the “executive” part of the Mini also applies to the pricing structure.