Most people looking to buy a new computer focus on the midrange sector. The reasoning is simple and sound: below a certain price point, it is difficult if not impossible to get all of the features and performance you want; meanwhile, go the other direction and once you reach a certain price the law of diminishing returns kicks in. What's left is a large category of computer equipment that can cover the needs of virtually all computer users. Today we're looking at three laptops that fall into this market segment, and as you might expect there are many similarities along with a few noteworthy differences.

While it would be great to test every current laptop from every manufacturer, time constraints and manufacturer participation doesn't make that possible. However, as we discussed in our mobile buyers guide, the real differences between many laptops are often insignificant. If you have the same base parts, you end up with the same level of performance and/or features. So we end up with a bunch of laptops where the only differences other than brand name come in the areas of price, support, and/or warranty.

Something else that we've discovered is that the shelf life of many notebooks has become increasingly small, with some models seemingly only on the market for a few months before being replaced by an updated version. Some of the updates may be significant, while others merely represent a slight upgrade in certain areas. The Centrino 2 platform has the potential to be either important or relatively meaningless, depending on your needs and the specific implementation. Actual performance doesn't change a whole lot, but the latest Intel mobile processors (i.e. the P-series of mobile Core 2 Duo processors) do consume less power than the older parts, and if you get one of the new laptops that supports DDR3 memory the result can significantly improve battery life. We should have a couple new Centrino 2 offerings in our labs for testing shortly, but unfortunately all of the models we are looking at today use slightly older parts. 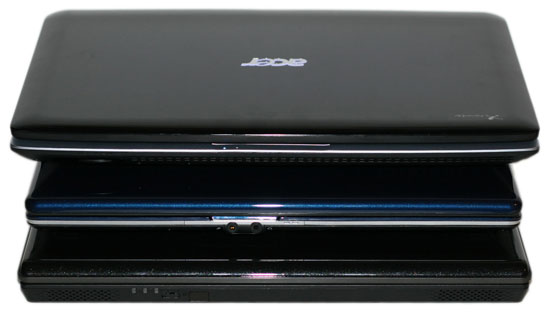 For this mini roundup, we have laptops from Acer, AVADirect, and Gateway with prices ranging from as low as $1100 all the way up to $1750. Performance in many areas ends up being virtually identical, as we will shortly see, but before you decide that the cheapest option is therefore the best, you will want to consider some of the features and upgrades the extra money gets you. Form factor is another item to consider, with the general rule being that if performance stays the same and you shrink the form factor, prices will go up - sometimes substantially. The reverse is also true, which is why we will include the $1450 Gateway P-7811 gaming laptop as a point of reference in our benchmarks.