The networked management for the Supermicro SYS-120U-TNR uses the latest interface from Supermicro through the ASpeed AST2600 which is given an IP my DHCP upon connection. Interestingly enough trying to access the interface did not work with Chrome at all - after logging in it would just freeze on the system page while trying to get basic system details. In the end I had to use non-Chromium based Edge. On top of that both Chrome and Edge warned that the certificate for the BMC webpage was invalid, resulting in jumping through a hoop to access it. 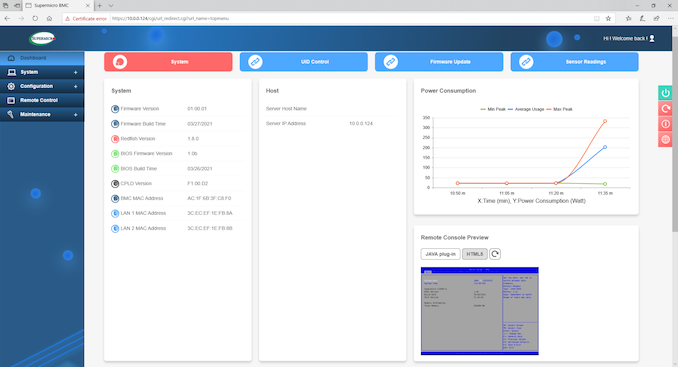 The username and password to access the system are no longer the default admin/admin or admin/password: due to the 2018 law in California known as SB-327, all IoT devices (including servers) that have administrator access to settings and configurations must have unique passwords. The username for us was still ADMIN however the password was found on a pull-out tab on the front of the server - or alternatively just on the inside of the double width PCIe slot inside the chassis.

The Supermicro interface is as detailed as a management interface needs to be, with this main dashboard showcasing firmware versions, power consumption, the remote console, and recent system messages and actions. 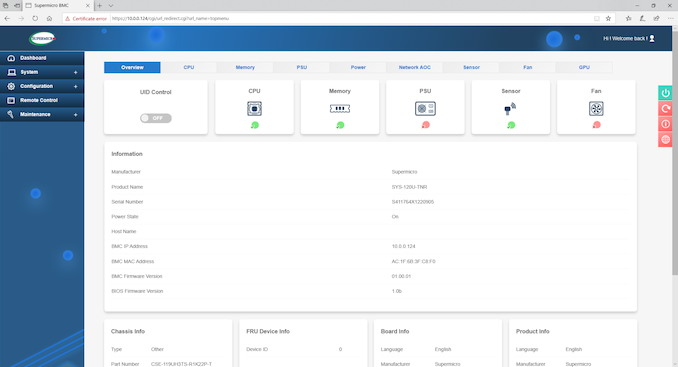 The System tab states a lot of similar information to the dashboard, with links to the separate component detection of the server.

The CPUs are both detected here, and although it says they have with a base frequency of 2.00 GHz (actually 2.6 GHz) and a turbo frequency of 4.5 GHz (actually 3.1 GHz), we actually measure the correct numbers in the operating system. 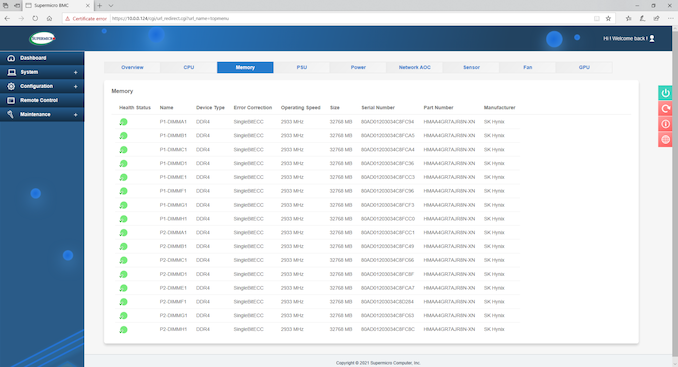 All sixteen memory modules are detected, with ECC enabled, for a total of 512 GB.

Power supplies as well – in this image we only have one of the 1200W models connected to the mains, but even without it will still showcase the thermal sensor on the power supply not connected. 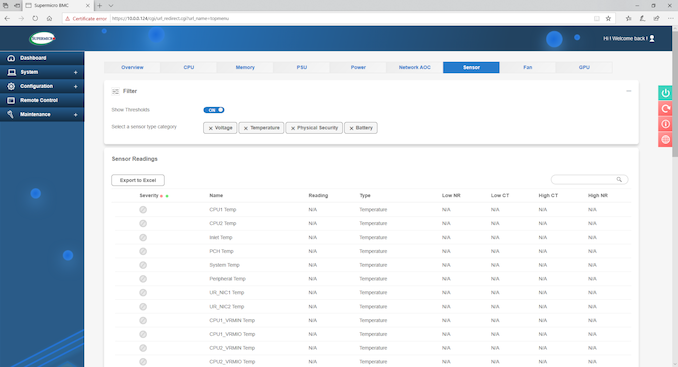 In our system, the sensor module didn’t seem to read anything from the hardware, however we did run the fans at full speed regardless. 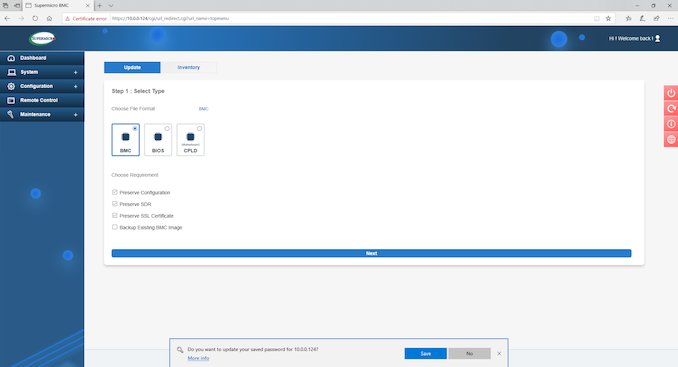 Updating the BMC or BIOS is relatively easy through the update interface when you have a file to hand. The system also keeps track of when it was updated and with what version firmware.

For remote control, both HTML5 and Java are supported, however we could not get the HTML 5 interface to work during our testing. Java worked well, and is likely kept here for the specific reason of legacy and fallback support despite Java not being recommended.

Overall the management options were as standard as we normally expect from this sort of system. On the plus side it looks a lot nicer than some of the base AMI / older interfaces we still encounter from time to time, but on the minus side I’m still unsure why it wouldn’t work in Chrome.

On the BIOS/UEFI side of the equation, we get a simple blue and grey interface from AMI which runs as standard on enterprise systems. The X12DPU-6 motherboard we are using has BIOS version 1.0b and a total of 512 GB of memory detected. 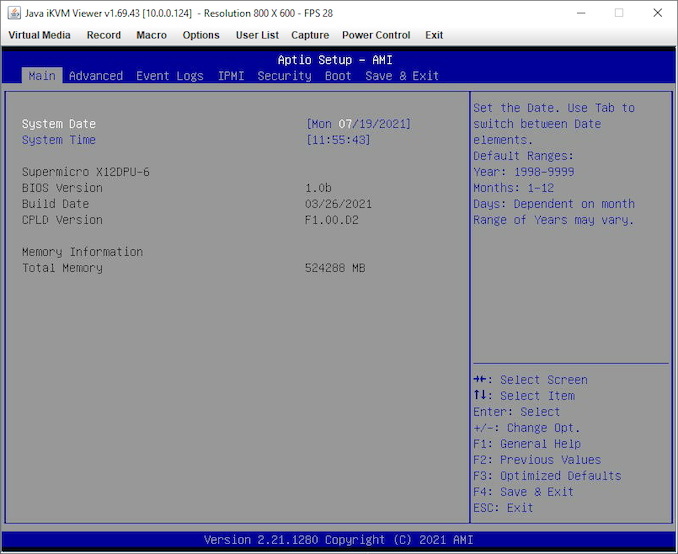 In the Advanced CPU section, it showcases that we have two Xeon Gold 6330 processors, with the D1 stepping. Similar to the BMC, it says here a 2.0 GHz base frequency (Intel’s official specifications state 2.5 GHz) but everything else looks in order. Individual cores can be disabled with the bitmaps as shown here: 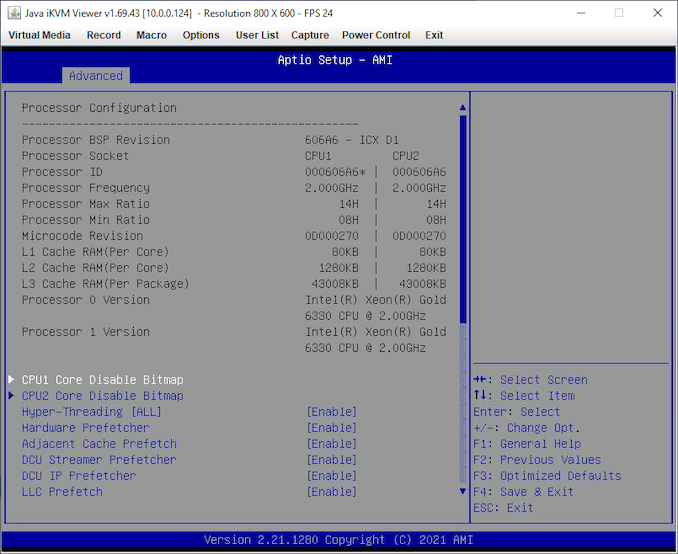 One of the new features of the Xeon Gold processors is SGX enclaves, which require TME to be enabled. 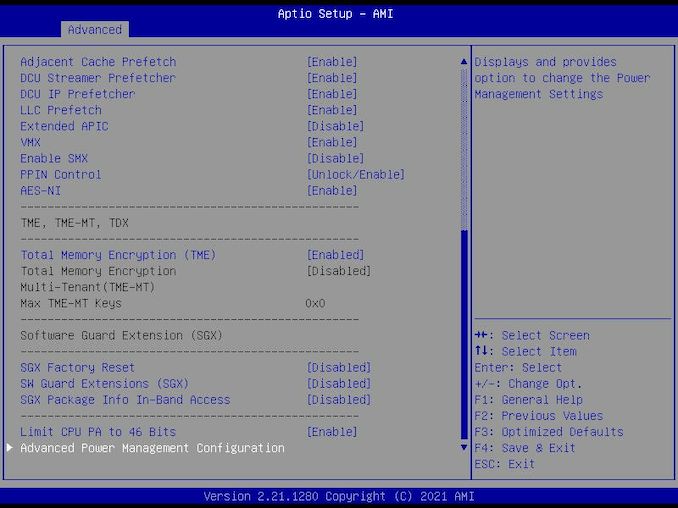 In the PCIe section, Above 4G Decoding was enabled by default (often disabled by default on consumer platforms), and the system allows a selection of NVMe firmware such that it can be software driven rather than vendor firmware driven. 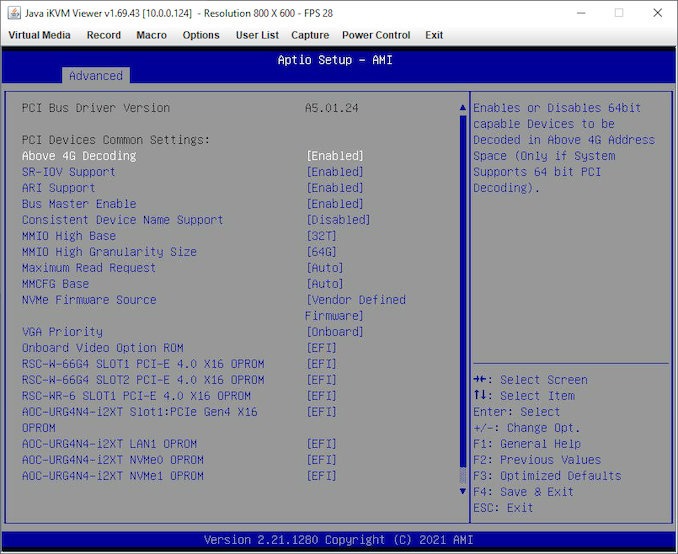 For the uncore / mesh sub-system, we can see that this system is configured to 11.2 GT/s speed UPI links (one of the upgrades over previous generation), but there are also a number of options here that could affect the system based on use case. Customers can select the system to prioritize topologically at the expense of feature performance (e.g. cores over IO), or vice versa. Similarly a user can select SNC2 (Sub-NUMA Clustering) to partition the processor into two hemispheres for lower latency memory accesses at the expense of immediate bandwidth. There is also an option to throttle cache snooping to manage power based on what sort of workloads the system would end up running. 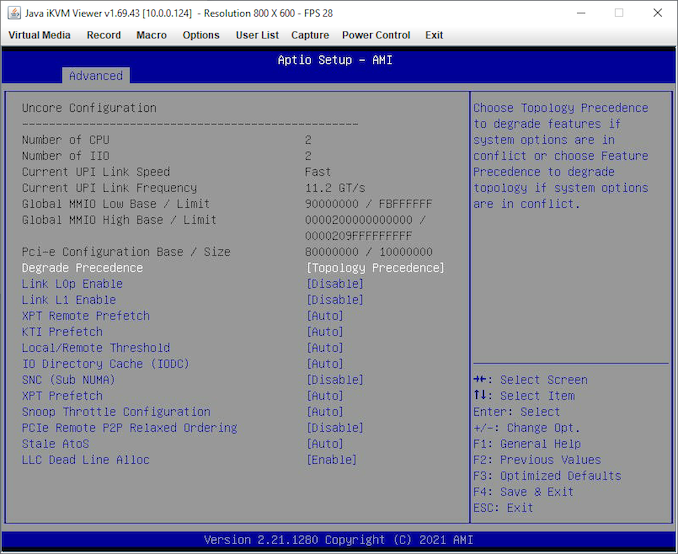 All the NVMe slots in the front panel of the system can be PCIe 4.0 x4 enabled, and there’s an option to check that here as well. 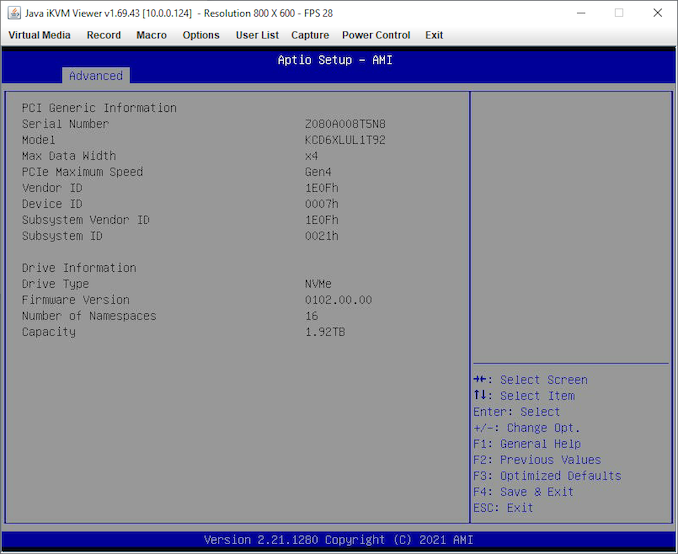 Other options in the BIOS include IMPI network settings, event logs, and traditional BIOS security.