In December, Intel announced a wave of new products based around its 144-layer 3D NAND and second-generation 3D XPoint memory, however these were all enterprise focused, and we've been waiting for a consumer variant to come to market. That product has now arrived: the Intel SSD 670p.

This is Intel's third generation of consumer NVMe SSD to use QLC (four bit per cell) NAND flash memory. The new 670p is the biggest update yet, bringing not only the next generation of QLC NAND, but also a major upgrade to the SSD controller. The Intel SSD 670p is launching today as a retail product, and will be used by major PC OEMs starting in April. Based on the pricing, it looks like Intel is solely targeting OEMs with this device. Update: Prices have been slashed just one day after launch, to very reasonable levels for a newly-launched retail product.

Intel's QLC Efforts: Past to Today

As a brief refresher, the first consumer QLC SSD was the Intel SSD 660p, launched in 2018 and based on their 64-layer 3D QLC and the Silicon Motion SM2263 controller. This drive (and the similar Crucial P1) proved that QLC NAND was a viable choice for entry-level consumer NVMe SSDs. Since then, that market segment has been largely divided between DRAMless TLC drives that are preferable at lower capacities, and QLC SSDs with DRAM caches that are competitive at and above 1TB.

In late 2019, Intel introduced a follow-up 665p. This upgraded to 96L QLC to provide slightly improved performance and endurance. The 512GB capacity was dropped and the firmware was tweaked to allow for larger SLC cache sizes on partially-filled drives. The 665p turned out to be a pretty short-lived drive: Intel announced in August 2020 that the 665p would be discontinued with a last-order date at the end of January 2021. Meanwhile, the 660p is still on the market.

Bringing us to the present, the new Intel 670p is rolling out with Intel's latest QLC NAND as well as a much-needed update to the SSD controller. Because the 665p is already off the market, Intel's marketing materials for the 670p take the unusual approach of comparing the 670p against the earlier 660p and largely ignoring the existence of the 665p, allowing Intel to slightly overstate the generational improvements and re-announce some advances (such as the larger SLC caches) that were already introduced by the 665p. The 670p brings back the 512GB capacity (ill-advised as it may be) and appears to be intended as a more complete replacement for the 660p.

The 670p is PCIe 3.0 x4 drive, desite it being new to market. This is because it reimagines Intel's positioning in the budget NVMe market, and going to something faster is seen as a premium play today.

As we detailed last month, Intel's new 144L QLC NAND is a considerable improvement over their 96-layer generation. Aside from the density increase, it brings slightly lower read latencies, more significant improvements to write latency and throughput, and a few other features to improve performance. The density increase should help further reduce costs, but Intel has fallen behind the rest of the industry in the layer-count race and had to adopt triple-deck string stacking in order to reach 144 layers, so their cost savings won't be as significant as competitors who should be able to reach similar QLC densities with their double-deck designs of 162-176 layers.

Terminology Info: NAND companies build 'decks' of 32-96 layers of bits, and then combine decks to get a total number of layers. Building more layers in a single deck is difficult, and so combining decks gives a higher total number of layers. Typically the companies that can put more layers in a single deck are said to have a more advanced process. Most companies use two decks to reach 150+ layers, while Intel uses 3 decks of 48 layers in this product to reach 144 layers .

The new 144L QLC has also enabled Intel to increase their write endurance ratings again. The 670p's write endurance is 23% higher than the 665p and 85% higher than the 660p, at roughly 370 write cycles. Which spread out over 5 years, works out to 0.2 drive writes per day (DWPD). More importantly, at 0.2 DWPD Intel's QLC SSDs aren't that far behind the 0.3 DWPD that most consumer TLC SSDs are rated for.

While the new NAND in the 670p certainly helps, it owes most of its improved performance to the upgraded SSD controller. The SM2263 controller used in the 660p and 665p is a low-cost 4-channel controller, appropriate for the entry-level market segment but seriously outdated. In particular, it is limited to IO speeds of 667 MT/s between the controller and the flash, which means that even with the fastest flash it cannot come close to saturating the PCIe 3.0 x4 host interface and struggles to go beyond about 2.4GB/s. 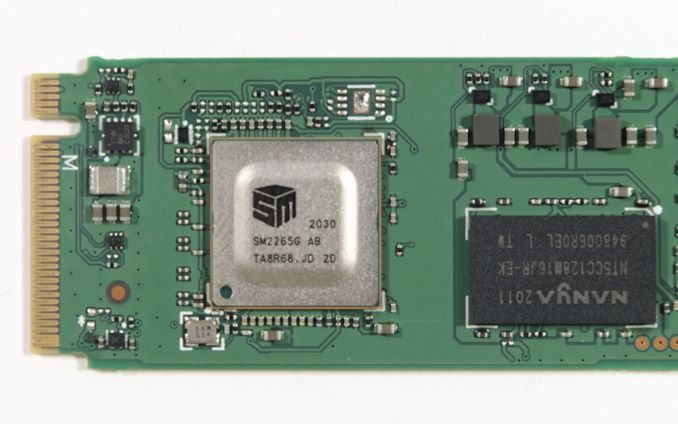 For the 670p, Intel has switched to the Silicon Motion SM2265. This controller hasn't been officially announced or documented by Silicon Motion, but a few references to it have popped up previously (though half of them are typos of the SM2256 SATA SSD controller). During the press briefing Q&A for the 670p, Intel stated the controller was a SM2262—the 8-channel controller from the same generation as the SM2263. So it's possible that the SM2265 is a more compact packaging of an SM2262 variant, much like the Phison E12S that's now used on many drives to make room for four NAND packages on the top side of the M.2 PCB.

Also possible is that the SM2265 may be more closely related to the SM2264 and SM2267 PCIe 4.0 controllers. The SM2267 is a four-channel controller and one of the first shipping PCIe 4.0 SSD controllers that is aimed at mainstream market segments rather than the high end. The package size for the SM2265 is the same as the SM2263 and SM2267 which suggests it's a four-channel controller (though the SM2267 actually has a higher pin count than the SM2262), and the performance means it would have to be supporting a higher IO speed on those four channels: closer to the SM2267's 1.2 GT/s rather than the 667 MT/s supported by the SM2263. In terms of features, the SM2265 seems to be a better fit with the SM2262/2263 generation: PCIe 3.0 instead of PCIe 4.0 and 8 queues instead of 15. The SM2265 may have inherited the upgraded error correction capabilities that Silicon Motion developed for the SM2264/2267 generation to better support QLC NAND. Overall, the SM2265 appears to be a mix of old and new, producing an updated low-cost controller that's better-suited to the remaining use cases for PCIe 3.0.

The layout of the Intel 670p is a lot less crowded than the 660p/665p: they're now using only two NAND packages to reach 2TB rather than four packages. Since the new 144L QLC is still manufactured with the same 1Tbit capacity per die, Intel's simply stacking more dies in each package. With this layout, Intel could have easily fit a controller the size of the 8-channel SM2262, but for the upcoming Optane Memory H20 they'll need to fit all these components into half the space to make room for the Optane half of that device. 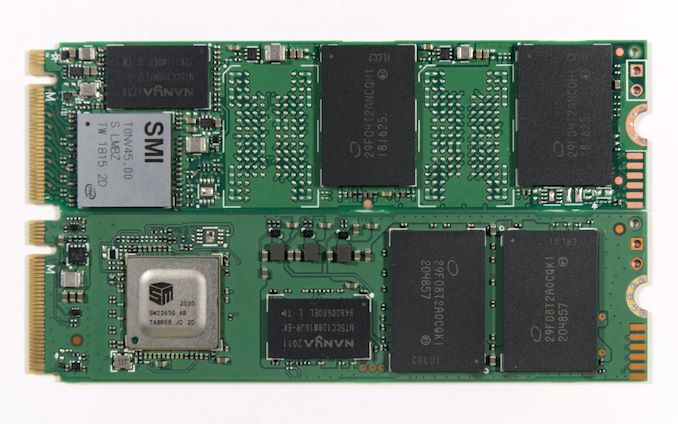 Aside from test results for the earlier Intel SSD 660p, this review includes results from the following competing products: