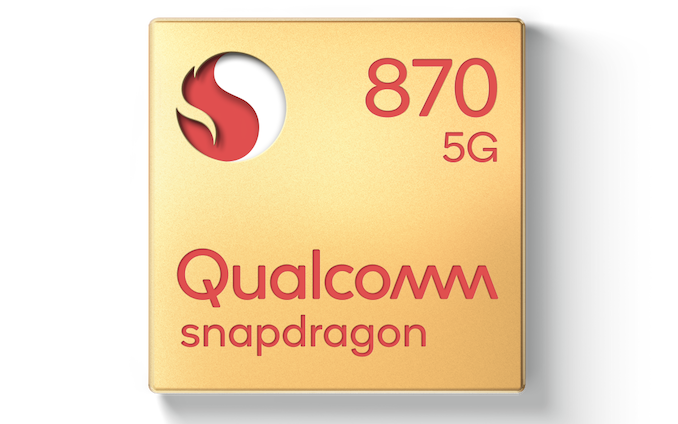 Today Qualcomm is making a rather unexpected SoC announcement in the form of the new Snapdragon 870. The chip is a rather odd release in Qualcomm’s chipset line-up in that this is actually a part derived from last year’s Snapdragon 865 series, with the new model being a new silicon bin that ups the clock frequencies for a small boost in performance, even though it’s getting a model name that would indicate more substantial changes (of which there aren’t).

Still being based off the “SM8250” silicon chip design that we saw employed in the Snapdragon 865 and Snapdragon 865+ last year, the new Snapdragon 870 is also part of this family, with it being the “AC” suffix SKU on the aforementioned part model number.

The specification changes compared to the Snapdragon 865+ which was released last summer are rather limited and, only concern the prime CPU core: The fastest Cortex-A77 core here goes up from 3.09GHz to 3.2GHz.

The release of this new SKU is quite weird, as it’s the first time ever that Qualcomm has announced a refresh of a last-generation part following the announcement and commercial release of their latest flagship SoC, that being the newer Snapdragon 888.

In today’s press release, Qualcomm shares that key customers such as Motorola, iQOO, OnePlus, OPPO and Xiaomi will be making use of the Snapdragon 870 in a selection of flagship devices this year. That’s also indeed quite weird, as in the past we’ve rarely seen vendors release new phones based on a past-year SoC design.

One theory I had is that because this generation we haven’t yet seen a successor to the Snapdragon 765 (which had been announced in 2019 in tandem with the 865), and that maybe instead of making a dedicated SoC in that “premium” SoC range, the company could recycle previous-year flagship SoCs, a tactic which in my view could be perfectly valid and viable. The company however dismissed the idea, disclosing that the new 870 not meant to replace the 765, and that a true successor to the 765 will be coming further down the line.

So it seems that this year we’ll be seeing new contemporary smartphone designs with both the Snapdragon 888 as well as the Snapdragon 870 in the flagship segment, which will be quite interesting to see how that plays out in terms of performance, feature, and especially pricing differentiation.