Sean Maloney alluded to a presentation by Intel's Mooly Eden, VP of Intel's Mobility Group and GM of Intel's Mobile Platforms Group. Although he wears a marketing hat these days, Mooly was the head of the design team of the original Pentium M (Banias) so he's an engineer at heart. The presentation was supposed to shed some more light on Intel's Yonah microprocessor, the dual core 65nm successor to Dothan.

In a brief conversation with Mooly before he got ready to speak, he reaffirmed that Yonah is much more than just two Dothans stuck together. While the same can't be said about the desktop Pentium D, when Mooly says something is more complex than people want to make it out to be, it usually is. Unfortunately architectural details about Yonah won't really be unveiled until later this year at the Fall IDF, despite that fact Mooly did provide some details on some of the more curious points brought up in this morning's presentation.

Mooly started out by saying that by the end of the year there will be over 150 Sonoma based Centrino systems, "but at IDF to speak about the present is the past." At which point he dove into discussion about Yonah.

The first question? Why wait until 2006 for a dual core Pentium M, when Intel is pushing for dual core in the desktop next quarter. The answer? It would simply be too big for a mobile platform, Yonah was designed from the start to be a 65nm processor, and thus it will have to wait until 2006.

On another somewhat related note, Mooly mentioned that the design of Yonah was started well before he left the Intel design center in Israel for the US, meaning that the Yonah team has been hard at work since before the launch of the original Pentium M.

The other main point that Mooly wanted to get across is that Yonah is far from two Dothans stuck together. We already know that Yonah features a shared 2MB L2 cache (shared by both cores), which is an initial indication that its not just two Dothans. But what else is there that sets Yonah apart from Dothan?

All of the major performance improvements to each of Yonah's cores seem to revolve around SIMD FP and FP performance, two of the Pentium M's present day weaknesses in comparison to the Pentium 4. 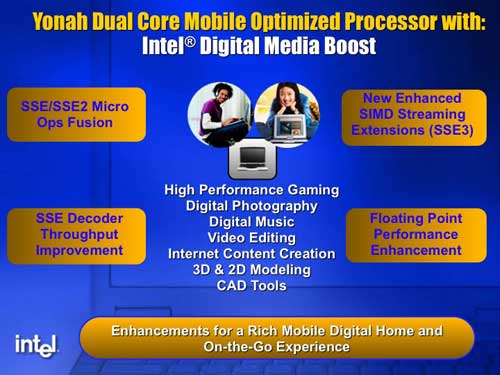 The first improvement is that now all three of Yonah's decoders can decode SSE instructions, regardless of the type of instruction. Improving the decode width of the processor is a quick way to improve performance.

Next, SSE/SSE2 operations (not sure if all can be, but at least some) can now be fused using the Micro Ops Fusion engine of Yonah. At a high level, the benefit here is increased performance and lower power consumption, we'll get into architectural details of why that is when we eventually sink our teeth into Yonah next year.

Each of the two cores in Yonah have also received support for SSE3 instructions much like the Pentium 4 E.

The SSE/FP optimizations are all being grouped into what Intel is calling their Digital Media Boost technology, yes the names seem to get worse and worse as time goes on - but at least the functionality should be good.

Given that Yonah isn't going to a larger cache, the processor should have the same low latency 10 cycle 2MB L2 cache that we saw in Dothan, which is responsible for quite a bit of its performance. Combined with faster clock speeds (enabled by the 65nm process), dual core, a faster FSB and these "Digital Media" enhancements, Yonah may be a pretty solid competitor.