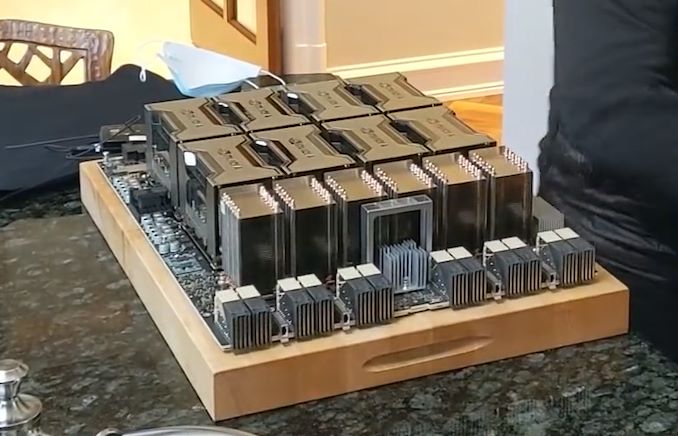 Among the many events delayed or canceled due to the current coronavirus pandemic is NVIDIA’s annual GPU Technology Conference. After a false start, the spring event was rescheduled as an all-digital affair, centered around CEO Jensen Huang’s annual keynote. And with that keynote set to be broadcast on Thursday morning, the company has posted a short video teasing some of the new hardware we’re presumably going to see in the keynote.

In the video, titled “What’s Jensen been cooking”, Huang pulls out a rather heavy-looking 8 GPU baseboard from his oven, placing it on his kitchen counter. Calling it “the world’s largest graphics card”, the board has apparently “been cookin’ for a while.”

With no other context provided in the 27 second video, the board looks a great deal like an updated version of the baseboards used in NVIDIA’s DGX and HGX compute servers. And with NVIDIA’s next-generation compute architecture and GPU widely expected to be unveiled at the event, we are almost certainly looking at a server board full of NVIDIA’s next-gen accelerators.

No doubt we’ll be seeing and hearing a lot more about this board and the GPUs on it come Thursday, where NVIDIA's keynote starts bright and early at 6am PT.