So here’s the big question – how does Intel’s hardware stack up against the Zen 2 processors from AMD. For this, we’re going to do some price-to-price comparisons.

In this instance, Intel has the higher turbo favored core and lower TDP, but AMD has the much higher base frequency, PCIe 4.0 support, and faster memory.

The Core i5-10500 has the higher turbo frequency, but don’t forget this is Zen 2 vs Skylake, and Zen 2 has the higher IPC, so that turbo deficit in frequency might actually still be a win for AMD. The fact that the base frequency is in AMD’s favor considerably, plus the DDR4 support and PCIe support, means that the AMD chip is likely the option here. The i5-10400F is in a similar boat, but at least the deficits it does have come with a price reduction.

Some users will state that the 3900X is the better comparison, only being $40 cheaper, so I’ve included it here as well. Ultimately the thing mainly going for the new hardware is that turbo frequency, up to 5.2 GHz on favored core or 5.3 GHz when under 70ºC. Just looking at the raw CPU data on paper, and some might consider the 10900 series a raw deal.

It should be noted that Intel has different PL2 recommendations for each of the overclockable processors:

Normally the recommended PL2 value is 1.25x the TDP, but in this case Intel is increasing the recommended values. This won’t stop the motherboard manufacturers from completely ignoring them, however.

Also, PL2 and Tau are based on a comparative power load that is defined as a function of a power virus, typically 90-93% or so. This means a complete power virus will go beyond this.

Intel is caught between a rock and a hard place. With its main competitor offering sixteen cores on its mainstream platform and on a better process node, Intel’s struggles with its 10nm process means that the company has to rely on old faithful, 14nm, another time. Unfortunately old faithful is showing its age, especially combined with the fifth generation of Skylake, and all Intel can do is apply new optimizations to get the best out of the chip.

This is to be fair, if I was in Intel’s shoes, what I would probably be doing as well. Rearchitecting production lines to start testing for favored cores isn’t as straightforward as users might think, and then adding in more control logic for Thermal Velocity Boost also means expanding out the firmware and driver support too. Adding in things like DMI/PEG overclocking, per-core HT selection, and VF curves, help with keeping the platform interesting. 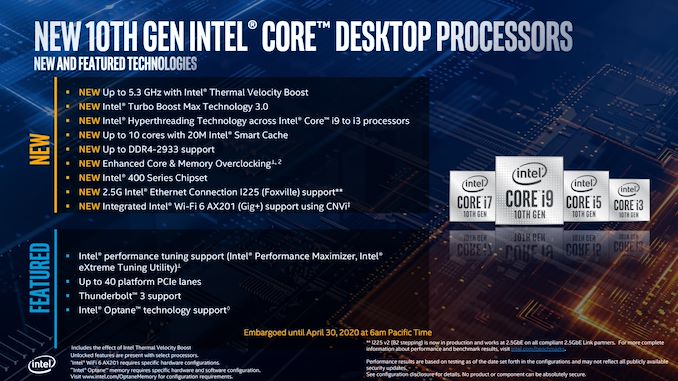 In an ideal world, on the desktop Intel would be on its second generation of 10nm hardware by now. We would also be on Ice Lake or a post-Ice Lake microarchitecture, and this would be the suitable entry point for PCIe 4.0 connectivity. As it stands we need to wait, and now we have a new motherboard line with partial PCIe 4.0 support for a product that doesn’t exist yet. Unfortunately this is where I think Intel has made its biggest mistake, in having a new socket/chipset combination straddle the generations between PCIe 3.0 and PCIe 4.0. This is going to create a lot of confusion, especially if some of the new motherboards that are designed to meet ‘PCIe 4.0 specification’ end up not working all that well with the future Rocket Lake product. It’s not a hurdle I would like to come across if I was in the target market for this hardware. I would have, if possible, used the previous socket for another generation and then made the change over for PCIe 4.0 and a new socket with Rocket.

While Intel is announcing the hardware, the exact time it will be on shelves is unknown. Typically with these launches we will have a sense of when review samples will be arriving and when the hardware will go on shelves. At this point I still have open questions with Intel as to when that is – I guess that the online retailers will know when their stock is in place and it will be shown on their websites today.