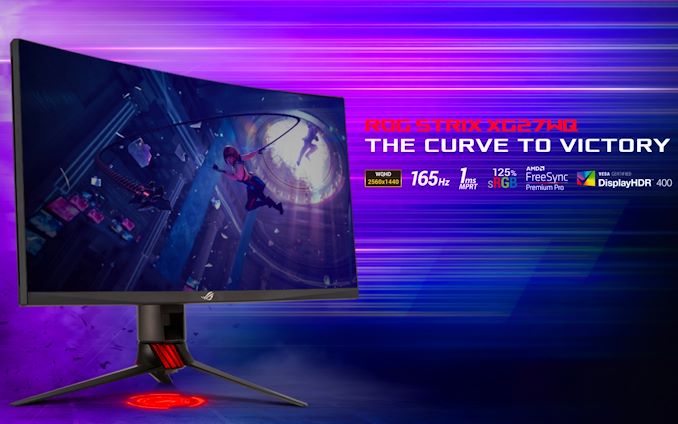 The ASUS ROG Strix XG27WQ monitor relies on a curved 27-inch VA panel with a 2560×1440 resolution. All together, the monitor offers a peak brightness of 450 nits, a 3000:1 contrast ratio, 178°/178° horizontal/vertical viewing angles, a 1 ms MPRT response time, and a 165 Hz maximum refresh rate. The LCD offers one DisplayPort 1.2 inputs and two HDMI 2.0 to connect to its host and also has a dual-port USB 3.0 hub along with a headphone output.

AMD mandates FreeSync Premium Pro (previously FreeSync 2) monitors to support a wide variable refresh rate range (48 – 144 Hz or 48 – 165 Hz in case of the  XG27WQ), feature Low Framerate Compensation, be capable of low-latency tone mapping to the monitor’s native color space, meet HDR brightness and and contrast requirements roughly equivalent to DisplayHDR 500, and reproduce at least 90% of the DCI-P3 color gamut (92% in the ROG's case). The capabilities of the ASUS ROG Strix XG27WQ monitor actually exceed AMD’s requirements, which makes it a rather potent choice for gamers.

Since we are dealing with an ASUS ROG-branded monitor, the model Strix XG27WQ not only features a stand that can adjust height, tilt, and swivel, but also one that has Aura Sync addressable RGB lighting as well as a projector that projects a logotype onto the table below.

Finally, it's worth keeping in mind that ASUS sometimes formally introduces its products well ahead of their actual release date. As things currently stand, the company has not revealed anything about an actual launch date or pricing for ROG Strix XG27WQ, so it remains to be seen when the monitor will actually hit the streets.