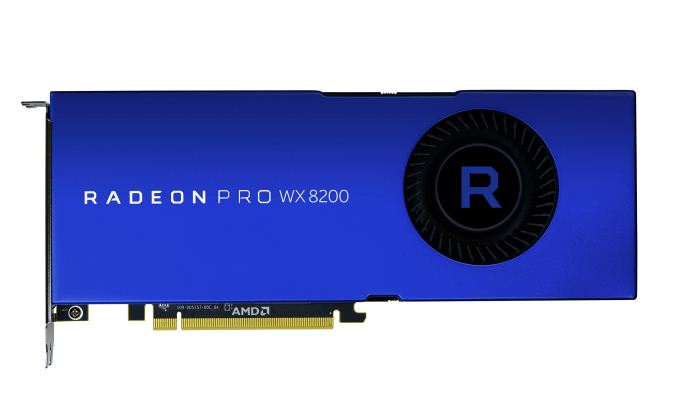 Kicking off this week is the annual SIGGRAPH graphics conference. Getting in ahead of the crowd – and their own CPU launch – AMD is announcing their latest workstation graphics card this Sunday morning.

Joining the Radeon Pro WX family is the Radeon Pro WX 8200, AMD’s second professional card based on the Vega GPU, and now the second-tier product in their professional graphics stack. The junior member of the team follows the WX 9100’s introduction at this show a year ago, and is designed to offer the same Vega-powered feature set with a bit less performance and a much lower price tag. The card will be hitting the shelves next month for $999.

Because this is another Vega card, the feature set for the card is rather straightforward and well understood at this point. Besides offering AMD’s latest and greatest graphics architecture, for mixed graphics/compute workloads Vega’s other marquee features like Rapid Packed Math (fast FP16 support) are available. As is AMD’s High Bandwidth Cache Controller (HBCC) for system memory utilization, which will have increased importance on this 8GB card. Meanwhile AMD continues to offer their own highly-tuned professional rendering engine, Radeon ProRender, which continues to receive its own updates as support is added to more professional visualization programs like PTC Creo.

Under the hood, the WX 8200 is actually a more interesting card than one would first think. The smaller sibling to the flagship WX 9100, it is of course a cut-down part, with 56 of the Vega 10 GPU’s 64 CUs enabled. With a boost clock of around 1500MHz, the card offers 10.75 TFLOPS of FP32 performance or 21.5 TFLOPS of FP16 performance. Overall this still leaves a rather large performance delta between the WX 7100 and the new card – the WX 8200 is much closer to the similarly Vega-based WX 9100 than it is the card below it – but the introduction of the WX 8200 does at least start narrow that gulf.

More interesting is the memory configuration. At a high level this is another 8GB Vega 10-based card, using 2 stacks of 4-Hi HBM2 memory, and creating an important product distinction between the WX 8200 and the WX 9100, as the faster card remains the only modern Radeon Pro WX card with 16GB of VRAM. However the memory clock on the WX 8200 is quite curious: it’s not 1.89Gbps like every other full-speed Vega 10 card we’ve seen to date, but rather runs at a flat 2.0Gbps. The end result is that the WX 8200 actually has the greatest memory bandwidth of any Vega 10 card, with 512GB/sec of memory bandwidth. And consequently, there are going to be edge cases where the WX 8200 is actually faster than the WX 9100 – particularly raw pixel throughput-bound scenarios – as the new card enjoys a small memory clockspeed advantage.

AMD for their part isn’t drawing a whole lot of attention to the matter. But when poked about it, they’re mentioning that the WX 8200 is using SK Hynix’s “Gen 2” HBM2, which unveiled earlier this year, offers memory speeds up to 2.4Gbps. The net result of this is all of a 6% increase in memory bandwidth – so don’t expect to see AMD replacing existing products for slightly faster memory – but from a tech perspective it’s an accomplishment for AMD that, at last, they’ve finally hit 512GB/sec of memory bandwidth on a Vega 10 part, just as they originally wanted to.

Moving on, AMD’s official TDP/max power consumption value for the card is 230W, which is roughly where the WX 9100 stands as well. The card does feature both a 6-pin and 8-pin external PCIe power connector – so it will require an appropriate power supply, but nothing exotic. 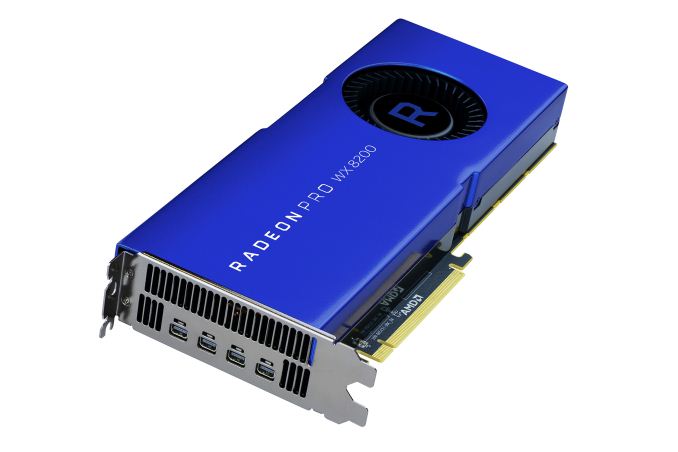 Meanwhile for display outputs, the WX 8200 is a bit cut down from the WX 9100 here, offering 4 Mini DisplayPort 1.4 ports. This keeps it competitive with NVIDIA – who naturally tops out at 4 display outputs to begin with – while introducing another element of product differentiation between this card and the more expensive WX 9100. Given how relatively rarely we see miniDP these days, I am somewhat surprised AMD went with miniDP here rather than full-sized ports – since with only 4 of them, they would fit on this card (and indeed this is what the WX 7100 does) – but I suppose AMD is looking for consistency with the WX 9100. Anyhow, all told these ports offer the usual flexibility one would expect with DisplayPort 1.4, including the ability to team them together to drive a single 8K display.

As for the competitive landscape, overall the WX 8200 is being positioned very similarly to AMD’s other Pro cards. That is to say that they are significantly undercutting NVIDIA as far as pricing goes, with the WX 8200 set to retail for about half the price of its closest competitor, the Quadro P5000. To AMD marketing’s credit here, they actually straight-up acknowledge that in core CAD applications they aren’t going to have a performance advantage, while things should be more in AMD’s favor on compute throughput (e.g. rendering) and more mixed workloads like VR. 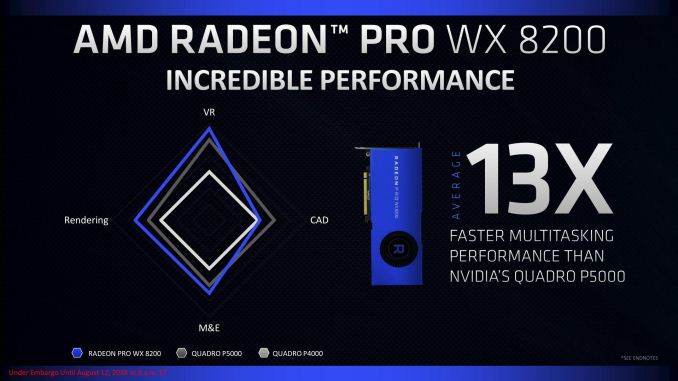 AMD’s press briefing for the WX 8200 also included an interesting demonstration that I unfortunately haven’t had time to look further in to, but which showcased the WX 8200 vastly outperforming the Quadro P5000 in GPU multitasking. Specifically, AMD was running Blender Cycles alongside SPECviewperf 13, with the P5000 diving hard on SPEC performance while Blender was active. Like all PR stunts I fully expect that this is cherry picking, but it’s an interesting product pitch none the less.

At any rate, expect to see the Radeon Pro WX 8200 show up next month, while Newegg will begin taking pre-orders tomorrow. With a MSRP of $999, it’s going to be roughly twice the cost of the WX 7100, and a good 38% cheaper than the WX 9100. So for proviz users who may not need 16GB of VRAM or those extra two display outputs, the WX 8200 should be a significant value over both AMD and NVIDIA’s current products.