In conjunction with Microsoft’s new DirectX Raytracing (DXR) API announcement, today NVIDIA is unveiling their RTX technology, providing ray tracing acceleration for Volta and later GPUs. Intended to enable real-time ray tracing for games and other applications, RTX is essentially NVIDIA's DXR backend implementation. For this NVIDIA is utilizing a mix of software and hardware – including new microarchitectural features – though the company is not disclosing further details. Alongside RTX, NVIDIA is also announcing their new GameWorks ray tracing tools, currently in early access to select development partners.

With NVIDIA working with Microsoft, RTX is fully supported by DXR, meaning that all RTX functionality is exposed through the API. And while only Volta and newer architectures have the specific hardware features required for hardware acceleration of DXR/RTX, DXR's compatibility mode means that a DirectCompute path will be available for non-Volta hardware. Beyond Microsoft, a number of developers and game engines are supporting RTX, with DXR and RTX tech demos at GDC 2018. 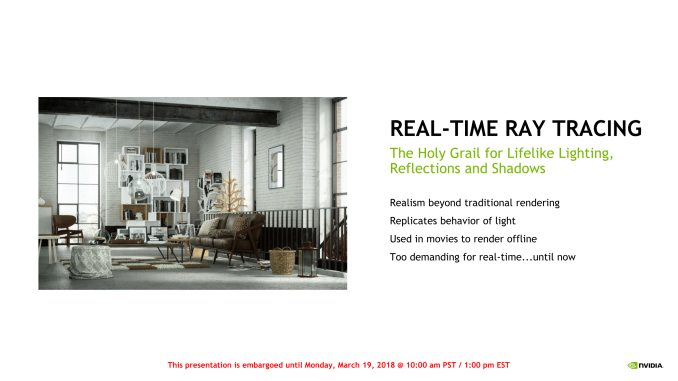 Taking a step back, though the goal of both DXR and RTX can be summed up as better graphics, ray tracing has been so computationally intensive that it has never been feasible for real time applications such as video games, instead featuring in offline rendering for movie graphics and similar. Where conventional raster-based rendering translates a 3D scene into a 2D image and applies various shaders and layers on top to emulate lighting effects, ray tracing essentially models imaginary ‘beams’ of light backwards from every pixel, and thus calculates all the associated bounces, refractions, and reflections. The end result is realistic and lifelike lighting, shadows, and reflections beyond what can be achieved with rasterization, but at the computational cost of replicating numerous rays regardless of scene complexity. 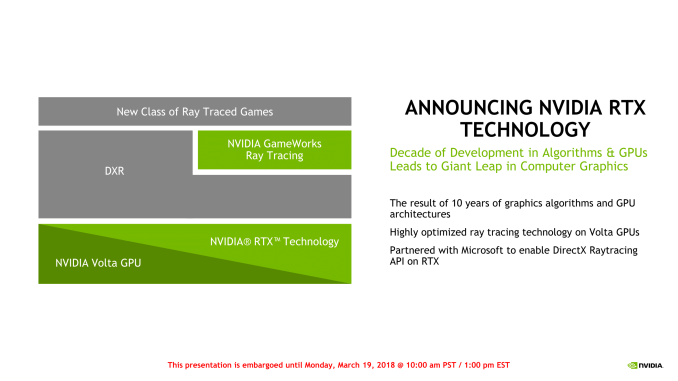 To that end, the idea of real time ray tracing in video games has long been tossed around, but the practical performance costs have always been an issue. At least until now, as this is what NVIDIA is addressing with their RTX technology and the underlying hardware.

Unfortunately, as earlier stated, not many technical details are being disclosed, making it difficult to piece together what appears to be a multi-layered technology. NVIDIA could only confirm that some indeterminate functionality in Volta does accelerate ray tracing, and that RTX is a mix of both hardware – NVIDIA also described Volta in a separate blogpost as having a "ray tracing engine" – along with various bits implemented in software running on a GPU's CUDA cores. Meanwhile NVIDIA also mentioned that they have the ability to leverage Volta's tensor cores in an indirect manner, accelerating ray tracing by doing AI denoising, where a neural network could be trained to reconstruct an image using fewer rays, a technology the company has shown off in the past at GTC. RTX itself was described as productizing certain hardware and software algorithms, but is distinct from DXR, the overlying general API. 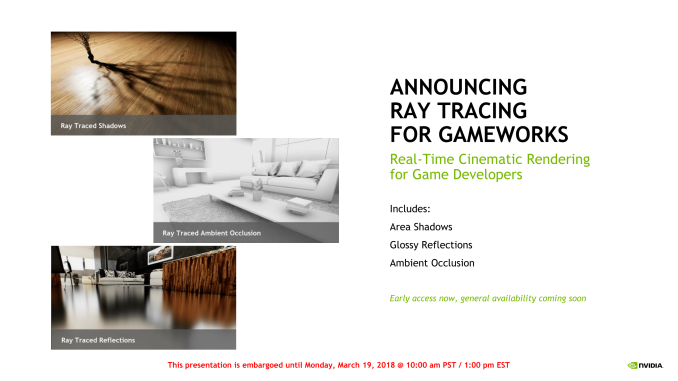 Meanwhile for the new GameWorks Ray Tracing tools, NVIDIA referred to the aforementioned ray-tracing denoiser module in NVIDIA GameWorks, including ray tracing turnkey libraries for area shadows, glossy reflections, and ambient occlusion. As these libraries were built on top of the DXR API, NVIDIA noted that these tools were not necessarily limited to pre-Volta architectures.

On that note, since the entire “GPU – RTX – DXR – GameWorks Ray Tracing” stack only applies to Volta, the broader public is essentially limited to the Titan V, and NVIDIA likewise noted that RTX technology of present was primarily intended for developer use. For possible ray tracing acceleration on pre-Volta architectures, NVIDIA only referred back to DXR, though Microsoft has equally referred back to vendors for hardware-related technical details. And while strict performance numbers aren’t being disclosed, NVIDIA stated that real time ray tracing with RTX on Volta would be “integer multiples faster” than with DXR on older hardware. 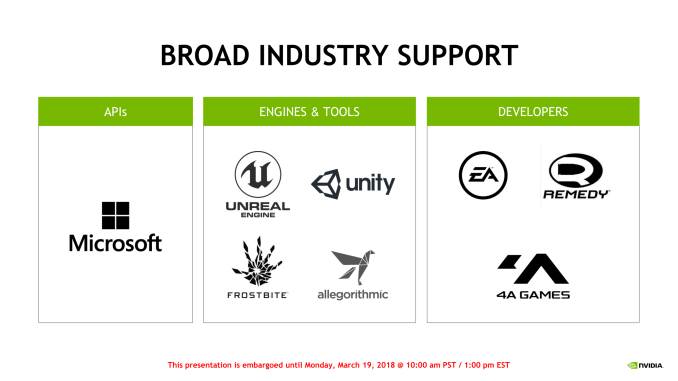 While the actual release of games featuring DXR and/or RTX is up to the developers, NVIDIA outlined that they began engaging with developers some months ago resulting in GDC demos this week, and postulated that consumers could expect games shipping this year using real-time ray tracing with DXR and RTX. Curiously, though NVIDIA cites RTX support by developers and game engines, it remains the case that only Volta or newer would support new games with RTX.

The GameWorks SDK updates will be available this quarter, with ray-traced ambient occlusion available later this summer.