While most of our readers will have likely used Wi-Fi for the better part of two decades - and in my case it has essentially been around most of my life - in practice few people at all know that much about how Wi-Fi works, even within technical circles. Overall, Wi-Fi is a deceptively complex topic for those that are unaware of how it works, as it extends far beyond simple radio transmission principles, especially with the most recent iterations of the technology. Some knowledge can definitely be transferred over from LTE and other cellular technologies, but Wi-Fi is a very different technology in the sense that much of the intelligence has to stay on the device, as opposed to being supplied by a base station or access point. For the most part it’s up to the device to decide what the right physical link rate is based upon the RF environment, when to transmit data, how to roam between access points, how and when to use power save mechanisms, and to proper connection setup between the device and the access point.

To understand Wi-Fi, we can start at the physical link layer, or Layer 1/L1. Anyone who has done some studying of how radios work will probably see a lot of similarities here as in general every Wi-Fi combo chipset that will ship in a phone is going to have a superheterodyne radio. At a high level, a superheterodyne radio is basically a radio that uses frequency mixing in order to convert the incoming signal to a different frequency to make the signal easier to process.

In the case of this kind of radio, the RF front end on the receive side contains filters, a low noise amplifier to get very weak signals up to usable levels, and a mixer is then used in conjunction with a local oscillator to get the incoming waveform from the signal frequency down to the carrier frequency. There are also likely to be some more filters and amplifiers after the local oscillator as the circuit is dealing with an electric signal (AC) at a much lower frequency, as while it’s pretty easy to get a transistor to switch on and off at 10 MHz it’s pretty much impossible to do the same thing at 60 GHz. From here, the signal can be converted from analog to digital, and also brought down to baseband frequency. For those that aren’t familiar with signal processing, baseband is effectively the frequency from 0 Hz up to the maximum signal frequency (which for Wi-Fi is often going to be the channel width, ranging from 20MHz to 80MHz). When the signal is at baseband, it’s possible to do a lot of signal processing that would otherwise not make a lot of sense, like Fourier transforms.

On the transmit side, Wi-Fi continues to look relatively similar at the physical block diagram level when compared to pretty much every commercial radio design since the 1940s. Starting at the modem, data is encoded from a digital bitstream into a baseband signal. This signal is then amplified appropriately, upconverted to the signal frequency with the local oscillator again. At this point we're back to the passband frequency that the radio will transmit at. Before the signal is transmitted though, it is fed through more amplifiers like a driver amplifier and filtered again. The signal is amplified again through the power amplifier to get up to a reasonable transmit power for the receiver before it is transmitted through the antenna.

This technically what enables the physical link layer to work, and any issues here can really cause everything to fall apart. In the case of 802.11ac physical layer, the signal is encoded into the carrier using modulation anywhere from BPSK up to 256QAM. We have discussed this before, but the short story is basically that a sinusoidal signal can be decomposed into two sinusoids that are out of phase by a quarter of a period. 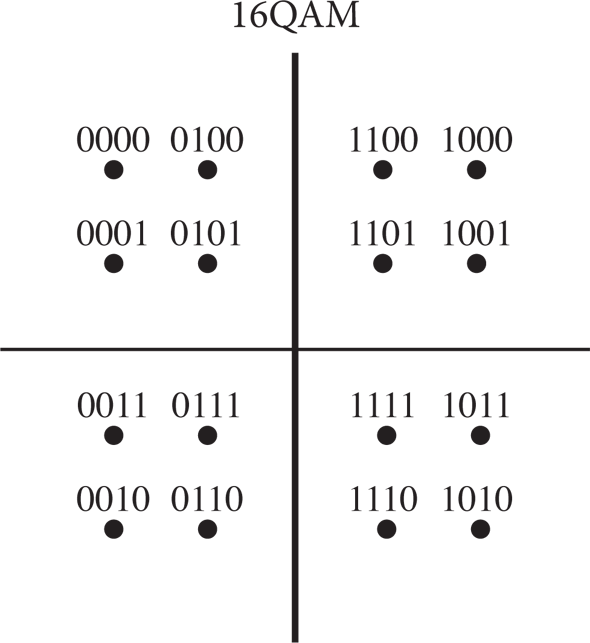 By varying these two components, it’s possible to generate an infinite number of points that represent a binary encoding. Of course, this is limited by the noise present in the received signal, which turns points into a probabilistic cloud.

In addition to this varying of phase, Wi-Fi also splits the channel into narrow subcarriers to maximize throughput. This technique is known as orthogonal frequency-division multiplexing, and is used in a number of technologies like LTE as well. 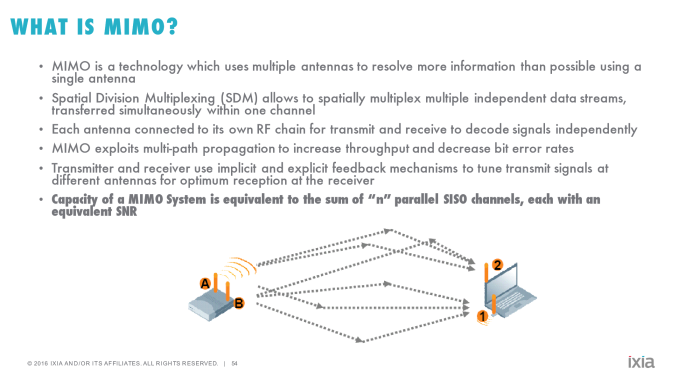 The other technique that is worth knowing about is Mulitiple Input and Multiple Output (MIMO) and Multi-User MIMO (MU-MIMO). In both cases, multiple antennas are used to enable additional throughput by utilizing multipath transmission. MU-MIMO in turn takes this a step further by using precise beamforming in order to spatially multiplex transmission and reception. While the concept is relatively simple, actually implementing this is difficult to say the least, which is why MU-MIMO Wi-Fi implementations have only been shipping for about a year or so. 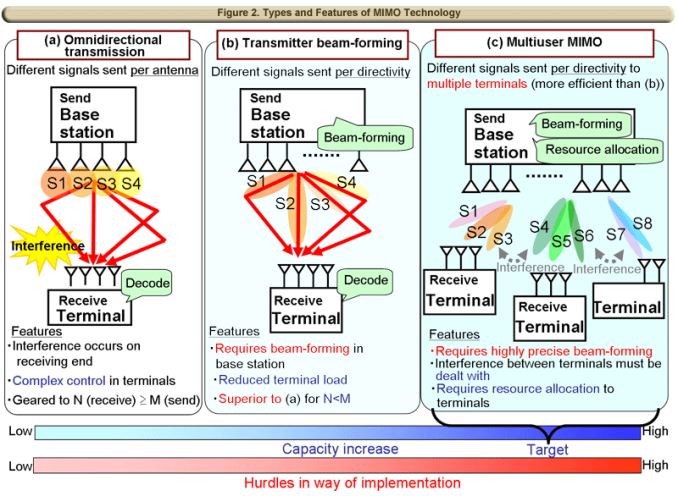 This aspect of Wi-Fi is known as the Physical Medium-Dependent layer, or PMD layer. There are more aspects that could be discussed regarding the physical link layer, but in the interest of not making things any more confusing we’ll stop here and talk about what aspects of the physical layer WaveDevice is actually capable of testing. With every packet, WaveDevice is capable of reporting a number of statistics about what’s happening at the physical link layer. Importantly, this includes the constellation error, by showing the average magnitude of the deviation of the actual I/Q position relative to the theoretical I/Q position for a given encoding. It’s also possible to look at how well the device is constraining its transmission to specific bands/channels, and whether the device is transmitting excessive levels of power, although transmit power limits is really more the realm of FCC compliance than anything else.

As a result, when we’re looking at relative Wi-Fi performance, we can actually start to make determinations about whether the problem with a device’s Wi-Fi performance is because it’s just not transmitting data properly and causing data corruption, or if it’s something happening at the software level. While the physical layer is critical, if you subscribe to the OSI model of networking then there are six layers above it that need to work as well to make sure that your cat pictures load as they should. So next we'll take a look at the data link layer to better understand how Wi-Fi works and what WaveDevice is capable of testing there.